Every Christmas Season it's the same. The kids say "Is Santa coming?" "Where's Santa?" Santa. Santa. Santa. My stomach clenches. I start the debate in my head. How do I feel about Santa? Is he encouraging mass consumerism in my offspring? Is he teaching about giving with love? Do I like maintaining the illusion, essentially lying to my kids?

Do I like (how do I put this?) playing the party line that he lives in an undisclosed Polar Hideout with Henchmen (er, elves) and a Magical Flying Vehicle propelled by Magical Flying Reindeer?

Wow. When you put it that way, he kind of sounds like a Supervillain. (Cool!)

There is a whole industry designed to support his case. In Canada, every letter to Santa is answered by hand. NORAD tracks him.

I know many parents use Santa as a parenting tool in November/December, bribing their kids to behave with what are probably empty threats. Have you ever known anyone who got coal in their stockings instead of presents??

I got really cynical this weekend when there were two Santa Claus Parades in relatively close proximity happening at the same time. I wondered if Santa at the mall went away while the local parade was happening.

I talk about this with Richard every year. He thinks that we are protecting the kid's innocence by letting them believe in Santa. He reminds me of the fond memory I have of talking to Santa on my Dad's Amateur Radio on Christmas Eve. He reminds me that I was not devastated when I discovered the truth. The newest issue of Chatelaine Magazine had an editorial where the author found out that finding out about Santa is harder on parents than it is on the kids.

Saint Nicholas was real. My church celebrates the feast in his name every year. I think I might let the kids pick out names from the Giving Tree at the Mall so they can play Santa themselves this year. 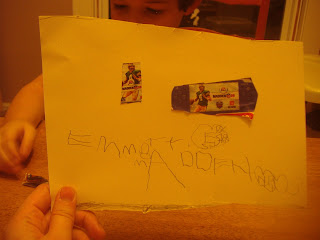 I gamely play along. Emmett wrote his letter. (Click on it to see it big enough to decipher his printing) I will help Charlotte write hers.

How do you deal with Santa in your home?

PS--if you want to write a letter to Santa, his address is: Santa Claus, North Pole, Canada, H0H 0H0
Posted by Unknown at 7:17 AM

I told DS straight out that the coal thing was made up by parents to make their kids behave, that Santa's about giving and love, not judgement. Now, I'm all about threatening to withhold dessert :-).

Since Josh is only 2 1/2 and doesn't really even know about Santa yet...we're honestly still figuring out how we're going to handle this one. I have cherished memories of Santa related things from my childhood...and there is a part of me that would like to share that with him. However--I also hesitate to put the focus on the whole Santa theme. Since (as you know) we are trying to come back to the basics of Christmas and the birth of Jesus being the focus-I guess I am leaning towards starting a new tradition. I find the idea of lying about Santa quite strange (despite my fond memories). We'll still do stockings, but not sure we'll give the credit to some mysterious jolly man in a red suit. I feel the whole Santa thing feeds into the "more more more, me me me" atmosphere that is so present at Christmas. I think we might treat Santa as more of a fun game to play, and we will try to avoid our kids learning that children who don't receive presents or many presents from Santa aren't "bad". Not fond of that one either. Blah blah blah! That's all for now!

We have Santa in our Christmas. But we are totally upfront about Santa being pretend. In our opinion (mine and my partner), Santa is just as much fun if he's known to be pretend because pretend is FUN! We play Santa and have a blast, just as we play superheros and princesses. Honestly, I don't think believing needs to be there for it to be memorable. Heck, we're atheists, and Christmas is my favourite time of year!

Santa, because he's pretend, doesn't factor into parenting here. Also, because we live in Turkey, there's no Santa culture around us. St. Nick IS from Turkey though, so we've talked about that.

I always have a moral dilema about Christmas. We are atheist-but I was raised a Catholic and have so many fond and woderful memories about Christmas. I still remember the 'magic' feel it all created. I wanted that for my two-but sometimes I wonder if we chose correctly. We do celebrate it more as a winter festival-and they know Santa comes-but have never been taught to request or wish for a gift. We've also decided that once they twig-gift giving from Santa will be over. That I feel is when it really becomes commercialised.

If the kids ask about hime I just ask them what they think. I don't properly say no, nor do I completely confirm--it's usualy a response such as 'people say...'
But my littlest loves everything to do with it-and plays Christmas music in July!

I know some boys who really got coal in their stockings! They were devestated at the time, they didn't change their behavior for the better-and 20 years on they haven't forgiven their mom.