I got to have a vacation this past weekend.  It all started with signing up for a training day with other Guide leaders.  The plan was to take the whole family in to the Big City and visit with the inlaws.  But, after having a near-miss on an icy road at home I got spooked and we decided we would be better off leaving the kids under Dad's watchful eye instead of taking them out on the highway in the dark on the Prairies in the dead of winter.

I loaded some music onto the Mp3 player on my new phone,  packed some books and knitting, and hopped on the bus.  It was wonderful.  My inlaws were kind enough to pick me up and take me to my seminar.  I got to hang out with other leaders and learned a lot.  I got to choose what to have for dinner and no one complained (Chinese!).  I got to enjoy a quiet house full of mostly grown ups.  I came back from my seminar energized and refreshed and armed with some great new ideas to bring to my Sparks unit.

This was the first time Richard has been left home alone with all three kids for a weekend.  He did really well.  Everyone's homework got done and they baked a welcome home cake for me when I returned.  What more could I ask? (I am sure he wants to take full credit when my Mom was actually visiting and helped out most of the day on Saturday and even cooked dinner for them--Thanks Mom!)

I need to find some more excuses to get away on my own now!  It is amazing what two days off can do for a Mom.
Posted by Unknown at 12:47 PM 1 comment:

Richard and I went to the movies this week.  We saw The King's Speech.  It is an incredible movie that touched me on a few emotional levels.

As you all know, I have been witnessing my Emmett's struggle with speech his entire life.  Watching King George grapple with his own struggles really hit home and the way Colin Firth conveys the frustration and hopelessness of having your body and voice betray you is something I see with my own boy.  It brought tears to my eyes more than once in the theatre. I went right along with the actors as they took me on this emotional roller coaster ride.  It was exhilarating.  Don't even get me started on the sets and costumes. I will go girly on you for a moment and just gush about how dreamy Colin Firth is as the King.  He.  Is. Dreamy.   Sigh. Swoon.. I highly recommend this movie to everyone I talk to, and now you, my readers as well.


I particularly enjoyed the portrayal of King George's marriage to Elizabeth.  It is not very often you see "good" movie marriages--they are usually just not noticed if they are good, or they are the focus of the movie as they disintegrate in front of the viewers in a spectacular fashion.  In this movie Elizabeth goes to bat for her husband, advocating for him but doing it in a way that doesn't seem patronizing or condescending.  She is steadfastly supportive of him and only wants him to be the best person he can be.  In return she is given the same respect and obvious love and affection.  The stuff rock solid relationships are made of.

Richard said it is very much a man's movie, but he couldn't exactly say why.  It is definitely not a "guy's movie" in the traditional sense.  There were no car chases, buxom women or explosions of any sort.

I am going to end this post here, and continue my discussion of my immersion in WW II European History later, when I discuss the book How the Girl Guides Won the War

, which deserves it's own story.

Stay tuned!!
Posted by Unknown at 2:25 PM No comments:

Charlotte has a way with words. 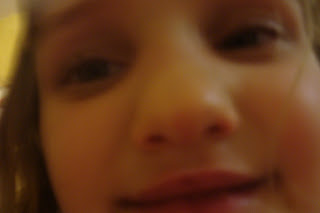 As we were driving home from Sparks tonight Charlotte chattered away in the backseat.  Something that she said really stuck out and touched me.

"I have the pictures of the people I like on my heart."
She then listed off the people.  Let's just say my girl has a gigantic heart.
Posted by Unknown at 8:16 PM 2 comments:

We now return you to your regularly scheduled life.

Winter break ended this week.  I, along with many, many other parents in my city breathed a sigh of relief.  Yes.  I know.  I am one of those terrible moms who looks forward to shuffling my kids out the door to school after two weeks at home.

OK, let me rephrase that.  I was relieved to send ONE of my kids off to school, the other was fine one way or the other.  He spent his break attached to the Wii unless we made him go outside for fresh air every other day or so.

Charlotte, on the other hand, freaked out.  When her schedule was turned upside down, so was she.  She quit sleeping, she quit listening to me, and had more and more meltdowns as the break wore on.  We tried to keep her busy.  We had company, Richard had days off.  She had a toy store of new things to play with.  We had a couple of play dates.  It wasn't enough.  Maybe it was too much.  The day before school started again she went from one meltdown to another for most of the day.  I walked her to the bus the next morning and breathed a sigh of relief.  I had my house back.  It was just Matthew and me again.   It was a relief.

I have discovered that winter break is not much of a break for me.  With everyone home all of the time I was cleaning up after them all of the time.  The dishwasher ran full twice a day.  The house was full of noise and chaos.  It was exhausting.  My body had enough and caught a bad cold that I am suffering through now as I am starting to get things back in order again.

I played with my Sparks last night.  I am looking forward to seeing my dance class moms next week and catching up with them.  I am hoping to get over this cold so I can get back on my treadmill.

How was your break?
Posted by Unknown at 8:19 PM 3 comments:

Just another romantic evening in the Knit Wit house.
Posted by Unknown at 9:00 AM 1 comment: