Disclosure: I am participating in the Chex Gluten Free program by Mom Central Canada on behalf of General Mills.  I received a Chex gift pack and a gift card as a thank you for my participation.  The opinions on this blog are my own.

There was a time in my life when I had to watch my mom struggle with an undiagnosed auto-immune disease.  We watched her get sicker and sicker, wasting away before our eyes.  She ended up going on an elimination diet, to try to pinpoint any possible food allergies that were making her sick.  It turns out gluten was the culprit.  For several years she ate a gluten-free diet and we saw the colour come back to her cheeks and her weight go back to normal.  Eating gluten-free at the time was not easy.  There were not many gluten-free alternatives to her favourite grain-based foods.  The foods that were available were very expensive, the texture was often very dense and coarse, and things just didn't taste very good.

Nowadays, as the gluten-free diet becomes more mainstream, there are many more options available to consumers.  Gluten-free Chex is one of them.  I was fortunate to receive boxes of both varieties of Gluten-free Chex to sample.  My boxes came with a recipe book that I  read through and I immediately bookmarked a couple of recipes to try. 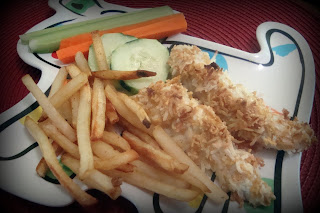 I opened the corn-based Honey Nut flavour first.  It is crunchy and sweet and tasted great right out of the box.   I used some of the cereal to make Sweet and Salty Coconut Chicken fingers for supper.  I didn't use tenders, like the recipe calls for, but I found that there was plenty of coating mix for five chicken breasts that I cut into fingers.   Charlotte was happy to help with cracking the eggs in the recipe and then crunching up the cereal into crumbs.  This recipe shows that if you are living gluten-free, you don't have to give up crispy breaded chicken if that is a favourite.  (I can see this coconut topping being delicious on jumbo shrimp too.)  The house smelled SO good while the fingers were baking.  Matthew thought I was making cookies!  He also didn't come up for air until his plate was clean.  I'd say that is high praise!


The kids have been enjoying the plain Rice Chex for breakfast.  It stays nice and crispy in milk and has a bit of sweetness so you don't need to add extra sugar to your bowl.  It would make really great snack bars.


So, if you are on a gluten-free diet and want to try something new, give Gluten-free Chex a try.  Take a peek at their website and you will find out that cereal is not just for breakfast.
Posted by Unknown at 7:49 AM No comments: Links to this post

lRun on over to my fitness blog to see what I have been up to.
Posted by Unknown at 11:05 AM No comments: Links to this post

Thank you so much for your kind words after my last post.  My heart has been warmed and I feel a lot better after having a bit of a hissy fit and getting the steam blown off. It means a lot to hear read those comments and feel your support, even if you aren't here with me in person.

I am taking a step back from pottying and letting Matthew use more diapers at the moment.  He needs to learn that I won't fly off the handle with every bowel movement.  He is still earning stickers on his potty chart for going pee and he is doing well with that.

I just have to find a bit more patience.  Just a TEENSY bit more.
Posted by Unknown at 2:59 PM 1 comment: Links to this post

I am done, but the end is nowhere in sight.

I have been cleaning up poop in this house for 6 years straight.  No breaks.  I have been potty training for SIX YEARS STRAIGHT.

What the hell am I doing wrong?  Emmett has sensory integration issues and for a while major motility problems.  We have him mostly straightened out, but he still has accidents.  He knows how to clean himself up now and his teacher's aid has been valuable in maintaining his dignity and hygeine at school.

Matthew has only recently mastered peeing in the potty and will do so very willingly and happily.  We are in a battle of wills against poop, and I think we are both losing.  He loves to poop anywhere he can as long as it isn't the bathroom.  His favourite places are in the back yard, in front of the tv, and while playing computer games.  I have long since banned him from the computer room and have developed a sixth sense about his outside trips.  He is getting more sneaky as I remove more of his pooping places.  Today he was not allowed back on my couch after having an accident there.  Later on, I caught him stinking up Emmett's closet.

He knows the drill.  He poops in his pants.  I get mad.  I set him on the toilet.  I then strip him down and set him in the shower (It is the only way to get him clean--some days he goes commando so the poop is smeared from waist to foot).   I then banish him to his room while I clean the rest of the bathroom and scrub out the tub and deal with his clothes.

If I put Matthew on a schedule, he balks.  If I let him be, I lose my cool.  I am afraid to sign him up for preschool.

I fear I have broken him.

He is now afraid of showers.  When he has the urge to poop, instead of going to the bathroom he runs away and cries.

I cry.  I won't use the main floor bathroom anymore since I spend so much time scrubbing shit off of the toilet. I don't want to use it.  I won't use the bathtub.  I do twice as much laundry since I can't have the boy's clothes mix with anyone else's in the house.  I walk around simmering with rage and paranoid my house smells like a dirty bathroom. I can't relax.   If you post on Facebook about your effortless potty training (or complain about what a long couple of weeks it has been)  I will seethe and then hide you from my feed.  .  Don't complain to me until you are counting your potty training time in YEARS, bitch.  If you try to offer me advice, I will probably cry.  In six years, you don't think I have heard it all?  Oh, and also, you have no idea how to train an older kid unless you have done it.  Your baby tricks are useless to me.  Don't take it personally.  I know I am being hysterical.  It's not you, it's me.

I can't take it anymore.

6 years of cleaning up shit and I have no idea when it is going to end.
Posted by Unknown at 8:11 PM 14 comments: Links to this post

Overheard in the Knit Wit House.

It was bedtime.  I was helping Matthew into his pyjamas when I thought we could have a Teachable Moment.
Here's how it went:

*If I asked him what colour Molly or Percy or Thomas was, he would totally know the answer.
Posted by Unknown at 8:31 PM 2 comments: Links to this post 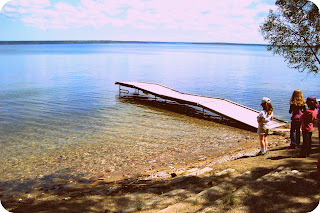 Charlotte and I packed up our sleeping bags and headed out to Spark/Brownie camp this weekend.  I got to be a cabin mom with my good friend Mindy, so we just had to show up and have fun. (And settle wiggly girls, and make sure that bugspray and sunscreen were applied regularly and that everyone went home with the same stuff they arrived with.)

I love camp.  Camps like these ones take you back in time.  There are no tvs, one phone in the dining hall, and lots of outside time.  We were very fortunate the weather was perfect.  It was so perfect that the girls played so hard during the day that we had to cut campfire short so everyone could go to bed early one night! 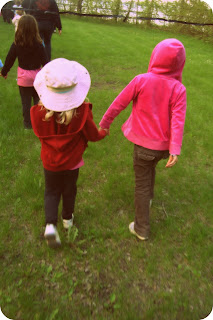 Posted by Unknown at 8:42 AM 3 comments: Links to this post 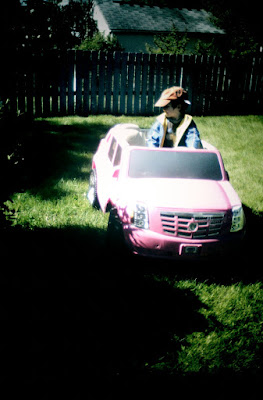 The sun came out today!  With the Spring we have been having you don't take a day like this for granted around here.  As I was digging up some strawberry plants in a friend's yard this morning Matthew took her daughter's hot pink electric car for a spin. I had a hard time getting him to say goodbye to it when it was time to go.

I hope you get to enjoy some fun this weekend!
Posted by Unknown at 1:22 PM No comments: Links to this post