From Mama To Mama:

* Just 1 in 5 women receives skilled medical care during childbirth.
* Haiti has the highest maternal mortaility ratio in the Western Hemisphere.
* 1 in 40 women will die as a result of pregnancy complications, unsafe abortion, or obstetrical emergency.
* Twelve percent of children die before the age of 5.

Konbit Sante is a Maine-based volunteer partnership working to save lives and improve health care in northern Haiti. In Haitian Creole, a konbit is a traditional method of working together to till your friends' and neighbors fields as well as your own - a cooperative effort. Sante means health. The name defines their committment to address the staggering health problems in northern Haiti where most lack basic care and live without running water.
One aspect of their work involves OB/GYN care . Konbit Sante is working to assemble Safe Birthing Kits to be distributed by traditional birth attendants in the desperately poor Fort St. Michel area of Cap-Haitien. These kits - consisting of plastic sheeting, hand sanitizer, a sterile piece of string and razor blade, and these newborn baby caps - have the potential to reduce infant and maternal mortality, and give babies a safer, healthier start.

My dear friend Poppins is collecting little caps to send to Maine to be added to the Safe Birth Kits that Konabit Sante is assembling. Simple little caps made from soft t-shirts that you probably have laying around your house, shrunk in the wash, oddly stained, or just not a colour you like anymore.

I raided my drawers and found four t-shirts. I cut the simple pattern out after bedtime last night and sewed eight little caps during Matthew's nap this morning. All told, I think I invested under two hours of my time to keep eight little newborn heads warm.

Babies need precious little. I think we tend to forget that in our cushy Western lifestyle. Heck, I was stunned to see what is in the safe birth kit for midwives in Hati. I can tell you that there was a lot more equipment littering my bedroom during my own homebirth last year. 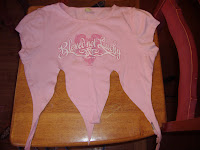 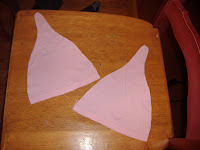 You don't even have to hem them! (I hate hemming) 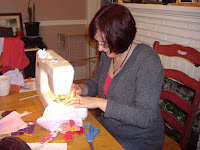 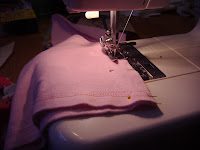 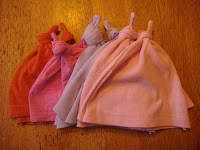 This is great. I reposted on my blog as well.

Oh WOW. I was literally reading Mama to Mama when I noticed a new post in my feed... and it was you linking to it!

I'm going to have to hand sew mine as I don't have a sewing machine. But one day I will!

That is awesome! You got an address? I'll try and do a few.

Oh, wow. When I heard the message on my phone last night I was startled - 8?! And I love, love, love that you posted photos of the process. So inspiring. I've dug up a few shirts that Sandra doesn't need anymore and I'll have to whip out a few - I haven't sewn jersey since high school, but I'm a grown woman and I can do it.

I absolutely love this idea! You've totally inspired me to dig through my closet and find some shirts so that I can sew some up before your friends sends them off!! Great job spreading the word! You've got a beautiful heart!

How did you make them? How do you know how big to make them?

I could do this.

Here is the link to the cap project: Caps to Cap-Haitien
There is a pdf to download that has the hat pattern I made.

I placed the edge of the pattern on the hem of my t-shirt, cut through both layers to make a front and a back and then pinned them right sides together and did a single seam up one side and down the other. A tight zigzag is recommended. I used a stretch stitch on my sewing machine that looked like a combination straigt/zigzag. Trim the seam allowance and turn it right side out. Knot the top.

If you have the caps your babies came home from the hospital in, all you need to do is place one of them on a t-shirt (bottom on the hem), draw around it adding about an inch seam allowance, cut and sew.

I hope I am not making it sound more complicated than it is. I just eyeballed the size. The great thing about a hat is that there will be some one out there who will fit it. According to the all-knowing Google, a had made for a full-term baby should fit a large grapefruit.