Matthew loves his Lego.  He has been spending a lot of time with this pirate ship lately.  It is constantly undergoing changes and expansions and renovations. 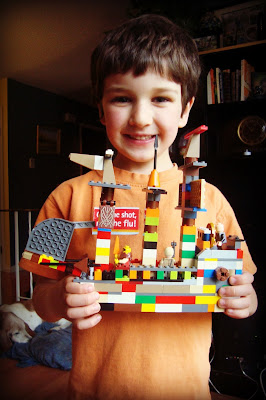 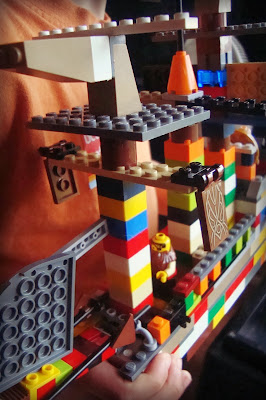 Posted by Unknown at 7:06 PM No comments: Links to this post

In Style? No Substance.

My mom reads quite a few magazines and she always passes them along to me when she's finished with them.  Usually they are things like Good Housekeeping, Canadian Living, Ladies Home Journal and the like.  The magazines all have a selection of advice columns, recipes, home decorating ideas and the like. There are also fashion layouts, but the clothes are usually pretty tame, and on the less-expensive end of the spectrum.

In my latest batch of magazines, In Style Magazine was at the top of the pile.  Now, I usually love paging through a fashion magazine to look at all of the pretty pictures.  Not this time.  This time, I started to feel really uncomfortable, bordering on annoyed.

I feel like the writing style of In Style magazine is designed to make you feel insecure.  To make you feel like you MUST do everything you can to try to look like the celebrities in the pictures or you will not fit in.  I was disappointed in the celebrity interview this month with actor Damian Lewis.  They gloss over the fact that despite the fact his family was poor,  he went to school at the prestigious Eton College, whose graduates include many British Prime ministers and members of the Royal Family.  How did he end up there?  What did he learn? Instead, they talk about the fashion designers he likes to wear.  He wanted to talk about the impact he is making on people through his latest role on TV as  an American soldier with PTSD, but instead he had to talk about the clothes he was wearing.

I counted 20 pages of ads for high-end brands at the front of the magazine before you even get to the table of contents--including a two-page spread for $1500 boots a beautiful actress is wearing.  There is no mention of the cost of the boots--or for the matching handbag in the ad hat also costs at least $1500.  How many In Style readers could afford those things?  The money spent on ONE of those things could cover my grocery budget for around six months.

Once you find the articles in the magazine they are not much better. One article, about breaking bad beauty habits just shows you how to substitute one expensive process for another.   Are you afraid of showing grey roots in public?  Don't pay for a full dye job all the time!  Schedule bi-weekly root touch up appointments!  There is no mention of another option: how to wean off the dye and rock your grey.  Hooked on blowouts?  Here are a list of products to buy.  How about instructions on how to cut your hair to show off the beauty of your natural texture?

Now, I love dressing up and playing with make up.  Heck, I work in a clothing store.  I put together outfits and try to get people to buy them as my job.  I don't make sales by making people feel insecure about NOT owning the clothes for sale in my store, though.

Maybe my problem is their brutal honesty at what they're doing.  The are unashamedly selling you stuff to look like celebrities and they are not afraid to admit it.  Other magazines sell their beauty spreads as "buy this so YOU feel like a better version of YOU" instead of "buy this because [current famous starlet] wore it once and [current famous starlet] is cool so that means if you wear this thing you'll be cool too".

Perhaps I should just respect In Style's commitment to superficiality and just hope that I am raising my own children to be confident enough that they won't feel the desperate need to buy whatever their favourite celebrities are wearing in the hopes it will help them make more friends.

I know I have done one thing right:  I have gotten in the habit of turning tabloid magazines to face backward in the newsstand when there are articles on the cover shaming people for how they look--now Charlotte does it too.

In Style, you are going to be the coolest kid in my recycling bin this week.

This Thanksgiving weekend I'm thankful I have a handy husband who knows his way around a plumbing snake.  Laundry facilities have been restored!

In other news, I am trying to figure out how to work blogging into my routine lately.  It feels rather daunting to have to think up things to write when I often don't have  a lot of time at home to think deep thoughts.  I am going to try micro blogging for my three readers who are still here with me.

Well, I am going to give it a try.
Posted by Unknown at 9:01 AM 2 comments: Links to this post

....to discover your laundry room floor covered in water on the Friday of a long weekend.