Life has been getting crazy around here. Some days I feel like I am in over my head.

Char's brain is growing so fast she can't keep up to it. There are words on the tip of her tongue and things that she desperately wants to say that don't come out. She took her first real steps last night. She wants to know everything, touch everything, dig into everything. When she can't have her way, either because Mom said so or she is physically unable, she screams. And screams. It is a scream that makes me feel like I am losing my mind. She is becoming more clingy and needy lately and I think it is because she is learning so much that it is scary to her. This means that around 4:30 PM when she used to nap she screams. This is the time I ususally cook dinner. Her screaming sometimes freaks Emm out and he starts to cry. I then want to cry/scream. Sometimes I do. I take every ounce of self-control I have and I manage to stay, despite every instinct telling me to run away.

Emm is making real progress with his therapy. He is making consonant sounds sometimes. This is a big deal. He "talks" on the phone with my Mom and kisses her goodbye. This is huge. He shares his cheerios willingly at playgroup. (Only with the pretty girls) He is smart enough to reach the things I have set out of the way. He can work the disc drive on our computer. He can work the CD player in the kitchen. He can reach the "child-proof" latch on the pantry door. He can use my kitchen stepladder to get the food I put high shelves for a reason. When you say "No" to him he doesn't get angry like Char, he feels hurt. His eyes well up with tears and he buries his head in your lap. I feel like a monster when I get upset with him.

What's a Mom to do? I spent the beginning of this week feeling sorry for myself and eating chocolate and weeping, and occaisonally screaming and slamming doors. I got some uplifting peptalks from my mommy friends Sarah and Cheryl (thanks ladies--you don't know how much you helped me) It is time for me to put on my big-girl pants and make some changes.

That's all I have so far. Is there anything I'm missing? I think I can see a pinprick of light at the end of this tunnel--I just need to keep moving, right?
Posted by Unknown at 7:22 AM 2 comments: Links to this post 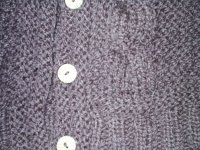 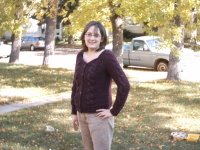 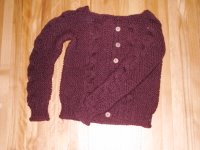 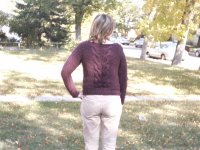 click on pictures to enlarge
After battling with the buttonhole band until I thought I would lose my mind, I give you Bulky Cabled Cardi

Notes:I had a hard time with the button band. I ended up abandoning the pattern instructions and winging it on my own. The rest of the sweater just flew off of my needles. I really like the top-down construction as there were only two seams to sew. Making-up went very quiclky. I finished it just in time--the leaves are changing and there is a definite nip in the air. Hubby says the back looks like Klingon Armor...in a good way. Thanks, Hon! I think your geek is showing a little.
Posted by Unknown at 12:26 PM 4 comments: Links to this post

Email ThisBlogThis!Share to TwitterShare to FacebookShare to Pinterest
Labels: knitting

The view from down there.

This is what happens when you let your three-year-old play with your camera. I don't think he did too badly! If you want to see any of these pictures full-sized, just click on them.

I was hoping I could post a picture of a beautiful finished cabled cardigan, but it is in time-out for having buttonbands that misbehave. Oh, and the buttons I chose make the sweater look like a clown costume. I am going to cast on some wristwarmers or possibly a sweater for Char in front of the insolent thing. That will show it. I don't need a naughty sweater to satisfy my knitting needs!
Posted by Unknown at 9:46 AM No comments: Links to this post

Scene: Jen's kitchen, around 1:00PM on a Sunday afternoon
Characters: Jen and Richard

Jen: Hon, what would you like for lunch?
Richard: What do we have?
Jen: How about soup? Oh, and there are some tomatoes left over from canning, so we can have tomato sandwiches too.
Richard: Ok, sounds good.

Jen proceeds to putter around, opening cans, getting bread and condiments out. She looks over at the corner of the counter where a container of tomatoes were last seen. The container is now empty. (Cue ominous music) Puzzled, Jen searches the kitchen for the tomatoes.

The family sits down to eat.

Richard: I need to go to the store. Do you need anything?
Jen: Milk, bananas, and tomatoes, I guess. (Cue ominous music)

Cut to dinnertime. The family sits down to eat tacos with inferior store-bought tomatoes. The evening then proceeds as most evenings do. Children get bathed, dishes get done, Emmett is tucked into bed while Char stays up to play with the grownups a bit longer.

Richard and Charlotte are sitting on the floor in the living room, playing with toys. Emmett's lunch bag is close by. It is suspiciously heavy. Richard opens it.

It is full of delicious garden tomatoes.
Posted by Unknown at 8:13 AM 1 comment: Links to this post

Email ThisBlogThis!Share to TwitterShare to FacebookShare to Pinterest
Labels: Emmett

Look what I can do! 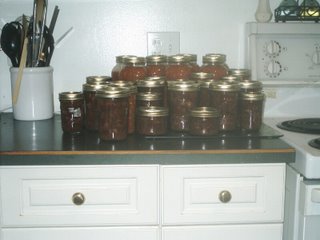 I feel a kinship with my Pioneer Foremothers today. 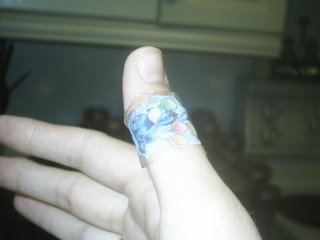 I did all of this and only sustained one injury. Not bad for a day's work!
Posted by Unknown at 5:16 PM No comments: Links to this post

The verdict is in...

...And we still don't really know what is going on with our little Emmett. We saw the developmental pediatrician yesterday. It was 3:00 in the afternoon and Emm was positively squirrely. He would not do the tests that the doctor wanted him to do to test his development. Based on his behaviour at the appointment and the way he interacted with Richard, her, and me she can positively say he is not Autistic. As best as she can guess he has an Oral-Motor Disorder. He has all of the symptoms on the list for Oral Motor disorder and very few of the oral apraxia ones. As far as I can gather that means his facial muscles are not strong enough and/or he can't co-ordinate them to make words.

The doctor said if we wanted to dig really deep we could go to a geneticist in The City and have his chromosomes checked. His ears are smoother than other ears and this leads her to believe that he may have a chromosomal defect that is causing his speech problems. A test like this would do nothing to further his treatment, it would only satisfy scientific curiosity. I am not interested in turning my boy into a lab rat at this point, but maybe when he is old enough for me to explain the blood tests and why we are doing them, we might consider it. Richard and I are now engaged in discussions to decide exactly whose side of the family the defective chromosomes came from (jokenly, of course).

All I know for sure is that there will be no end in sight for speech therapy. Since this appointment I have also been referred to a Provincial agency that provides support to families of children with develpomental delays. Emm is technically not delayed "enough" to qualify since it is only his speech that is affected, but it would be nice to find out if there is extra support out there for us. We were considered because Emm's speech delay is so profound. I'll take all the help I can get!

Emmett is doing his part. He is trying to make new shapes with his lips and he is trying to make new sounds. We are trying different ways to communicate now, sometimes we use signs, sometimes we use a picture board (this is proving to be quite successful). We may need to get a video phone--I gave Emm the phone to chat with my mother last night and he walked into the diningroom with the reciever and as he "talked" to her he pointed at various things in the room. He also waved "good bye" to her when she said good bye to him.

I am still processing how I feel, but overall I am hopeful.
Posted by Unknown at 7:23 AM 2 comments: Links to this post

As I was hanging my laundry on the clothesline I was matching up the socks that were in the load. They all had partners. I'd better go buy some lottery tickets!
Posted by Unknown at 10:01 AM No comments: Links to this post

Email ThisBlogThis!Share to TwitterShare to FacebookShare to Pinterest
Labels: laundry

Click on this link to see one of the best uses of treadmills I have come across. Don't try this at your gym!!

By my hairdresser. She moved to Halifax, the salon closed down and she didn't tell me. How did I find this out? It started a couple of days ago while I was looking in the mirror at my limp locks and contemplating what to do with them. I even bought some temporary hair colouring mousse in vibrant purple.

Today I came to my senses and called my salon. An unfamiliar voice answered the phone. I asked for Tammy, my stylist, and the unfamiliar voice said "Oh she moved to Halifax and her salon is closed. There are a couple of stylists from that salon that now work here.(And they brought thier phone number with them)" Oh. Great. I need a haircut so badly I am now booked with "Jen" from the old salon. I don't know what she looks like or what my hair will look like when she is done with me, but I am getting pretty desperate. Not desperate enough for a grocery-store or Zeller's haircut, but close.

I have gone to the old salon for almost 10 years. This is almost like starting dating again after a divorce. Now I have to choose someone new to tell all my secrets to. I can't just sit in the chair and say "Make me look nice" and have her know exactly what I want. I am a little nervous but optimistic. I guess it was time for a fresh new start and I didn't even know it.

What is going to happen to the purple mousse? Well, I may just have to see what Char and Emm look like with fresh new hairdos too!!
Posted by Unknown at 11:35 AM No comments: Links to this post