I am slowly going crazy....

What is it about February??  Charlotte and I were doing really well.  She was sleeping better and her moods were stabilizing nicely.  We had a lovely couple of weeks of equilibrium.  Then, February came.  The excitement of an upcoming birthday and the Arts Festival and a bit of a cold threw her into a tizzy.  Tantrums, sleep disturbances, mood swings.  I am feeling the effects of late winter angst as well.  I don't like how I feel in my own skin lately.  Old habits are creeping back in and I am mad at myself for slipping with my workouts and diet.  I am having a hard time running and it used to feel so good.  I am sick of having the same arguments with Charlotte over the same things.  I am tired of cooking the same food every day, washing the same clothes and cleaning up the same messes.  I know I am not the only one to have this feeling at this time of year.

As I type this the kids are downstairs trashing the playroom and screaming and my blood pressure is rising and I am feeling tension in my chest.  If I look to my left I will see a desk littered with paper and markers and books and toys.  One of those markers was recently used on the computer monitor.  I am so frustrated that there doesn't seem to be enough hiding places in the house for things the older kids need that the youngest can use for the purposes of evil.   I want to run away and hide but the windchill is minus 30 so if I go for a run outside I will surely have an asthma attack

So, I hide.  I play with photos.  I scream at the kids.  I wait for Winter to end and hope the floodwaters don't rise too high.
Posted by Unknown at 9:41 AM 5 comments:

Today is my birthday.  To celebrate I am sitting in my PJs playing with my premium subscription to the photo-editing site Picnik.  Yes, yes, all of you Photoshop wizards can scoff, but this is a really fun site.  Everything is really easy to use, so I can just relax and play without having to take a class first.

Tonight a babysitter is coming so I can stuff my face with sushi with some friends.  Tomorrow, I get to see Charlotte dance in the Arts Festival, and then chow down on a decadent chocolate cake made by the very talented Richard.

Yesterday was a cruddy day.  Kids and dog kept me up in the night, leaving me cranky and exhausted in the morning.  My new phone broke.  By some cruel twist of fate all of my Sparks helpers were unavailable at the same time.  I had to plan a meeting on the fly and come up with emergency back up helpers with almost no notice.  I was not sure how I could put my best face forward to the little girls who depend on me each week.

Then, two moms came to my rescue.  They sang the silly songs and enthusiastically played the silly games with their girls. I was given this: 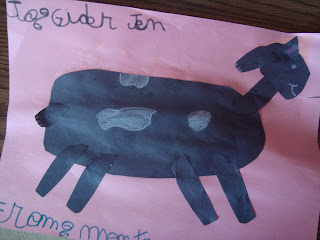 Every time I look at it I can't help but smile.  My little Sparks were the perfect antidote to my stormy mood.
Posted by Unknown at 11:16 AM 2 comments:

For those of you who might be new to my blog, click here to read History Lessons, Part 1.  Thanks for stopping by!

It is I Love to Read week in our school division.  This seems like a good time to talk about a book I recently read.

How the Girl Guides Won the War

is a fascinating story about the role European Girl Guides took during WWII. In the introduction, the author talks about how she was planning on writing a humor book, making fun of the Guides. During her research she realized she had to change the tone of her book as she learned more and more about how the Guiding movement helped the Women's Movement and girls who might not have had educational opportunities otherwise.


Can I just say that Girl Guides were seriously badass.  Brownies were taught to put out incendiary bombs with sand.  Guides ran foster homes out of abandoned manors in the countryside for evacuated city children.  There were Guide and Brownie groups run out of POW camps and in secret in Concentration Camps.   Merit Badges could be earned in rifle shooting and airplane mechanics.  Guiding gave these girls valuable survival skills that they taught to those around them.  Guiding gave them a routine to follow and a bit of normalcy to a crazy, scary time in their lives. The uniform was sometimes the only nice article of clothing these girls had.


I grew up in Guiding.  I started as a Brownie, worked my way through Guides and Pathfinders and then became a Jr. Leader in Brownies and then Assistant Leader in Guides.  I am now a Sparks Guider and starting Charlotte on her own Guiding journey..  I am proud to be part of an organization that was started by women and is still run by and for women.

I have learned some useful skills through Guiding and in reading this book, learned that some of the things I have learned for fun were actually used for survival at the beginning.  Fellow Guides out there:  do you remember having to cook sandwiches with Buddy Burners on a  coffee can camping stove?  I used them for fun and to earn a badge.  Guides in war-torn London taught people how to cook their daily meals on them.  Guides used to hold bomb shelter singalongs to help pass the time during air raids and to help calm people down by distracting them (it falls under one of the old Laws:  A Guide smiles and sings, even under difficulty.) I did that once too.  I once had to escort a rural patient by ambulance to a city hospital to have some tests done and get a terminal diagnosis confirmed.  The poor person was understandably worried and scared and stressed.  What did I do to help?  I sang silly campfire songs to him in the back of the ambulance to help take his mind off things for a moment.  The paramedics in the front thought I was nuts, but the patient managed to crack a smile and stayed relatively calm for our journey.

Even if you are not a Guide, I highly recommend this book.  It is a very interesting story about a very important time in world history.

I think it is essential reading for Guides, especially this month, when we celebrate the anniversary of the birthdays of our founders.
Posted by Unknown at 9:28 AM 2 comments: