Yesterday I saw something I never thought I would see in my house: 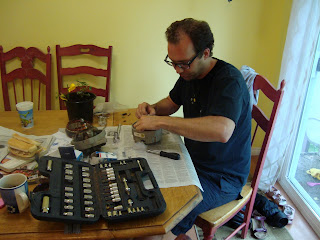 This is my husband, the computer software developer, rebuilding the alternator of his ahem, "classic" car.  (Is an early-eighties Pontiac Parisienne considered a classic yet?)

Somehow The Universe got the message to my grease-monkey brother and later that evening he called Richard so they could talk about it.  (Isn't it funny how that works sometimes?)

Later in the afternoon I mentioned this strange occurrence to my friends at a yarn-dyeing party. (This dyeing party, actually.)  The wise hostess and guest pointed out that this is the one of the interesting parts of being married.  Watching your partner grow and learn new things.  Richard is not from a handy family.  His parents are much more likely to hire people to do things than they are to tackle them  themselves.  The year I bought Richard a table saw his dad thought I was trying to hurt him!

So, I stewed on this overnight.  I tried to think of what I have been doing lately to grow.  I am learning to run. (4.19 miles yesterday!  Then I rode over 4 miles on my bike to and from my friend's house--and I can still walk today!  I am getting fit!)  I recently took an anger management class (that is for another post).

What have you done to grow lately?
Posted by Unknown at 7:44 AM

anger management? really? was it an Adam-Sandler's-character-in-the-movie-"anger management" moment? you're the least angry person i know! maybe I should phone you more often...

Guy in the picture said...