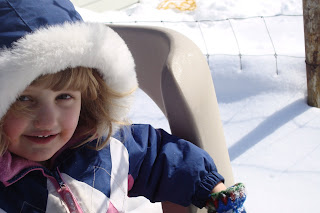 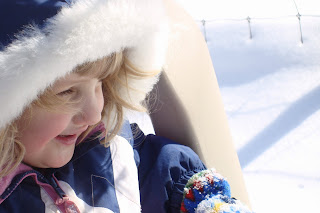 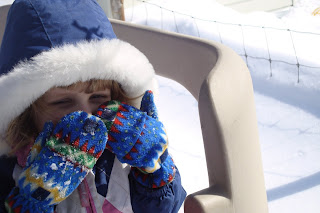 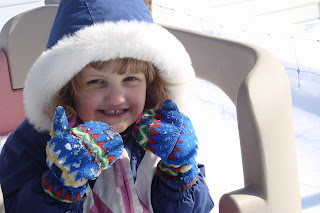 I took these pictures today, and despite the blinding sunshine I think they turned out pretty well. (As much as I love the "snow" setting on my camera, I will be very happy to turn the dial to something else very soon.)

My girl is a pretty little thing, isn't she?

Despite the sheer amount of snow in our yard the sun definitely feels warmer and it doesn't set until around 8:00 PM now. Positive signs that winter is on it's way out.

Emmett and I traveled to The Big City for a doctor's appointment during (hopefully) the last blizzard of the year. We had good news. The genetic testing we had done came back showing no chromosomal defects. Of course, the doctor we have is a real stickler for detail and has very high standards so he re-did the bloodwork because he felt that the hospital lab should have turned up their microscopes higher. To this doc, "good enough" by hospital standards is not "good enough" to him. In addition, Emmett's DNA is being sent off to a big University on the West Coast so a professor who is pioneering a new kind of genetic testing can have a peek at it too. I am not sure what this test will show, but the hospital already had a sample so it wouldn't cause Emmett any pain to help this person with her research.

Our next trip to the Big City will be for another MRI and another chat with the neurosurgeon.

Emmett contiues to make great progress with his speech. Nothing makes me happier than hiding in the kitchen while Emmett and Charlotte are playing in the living room and eavesdropping on their conversation. This is something at one time I thought I wouldn't be able to do. They say the funniest things when adults aren't in sight!

She is beautiful! Glad you have such a good Dr and life is good!
HUGS!

Glad to hear the genetics results came back good - and that your doc is a stickler.

That's fantastic about the speech progress!! I can't wait till I can hide and eavesdrop. :)