I should have posted this yesterday...

This post is mostly for my parents and Ami.

Hallow e'en was a couple of days ago.  The kids were really excited about about costumes and Trick-or-Treating, as usual.

Here are their costumes: 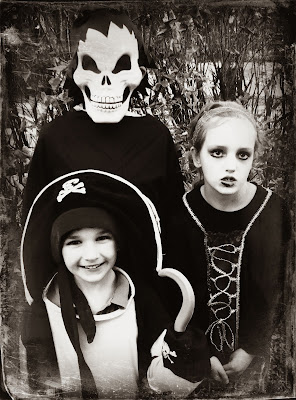 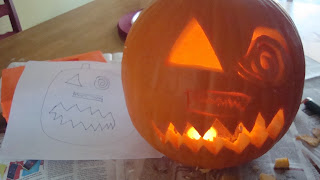 Charlotte designed this year's pumpkin.  I usually make much more elaborate designs, but I have never received as many compliments on a pumpkin as I have this year.  That seals it.  Charlotte is now our official Pumpkin Designer. 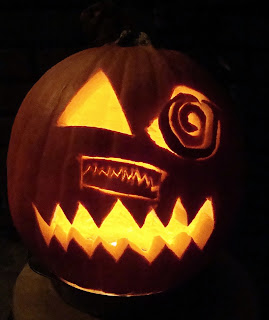 We took the kids to a Haunted Forest attraction this year and it was fun watching the kids scamper through the decorated woods full of costumed characters during the "No Scare" hour.  Matthew attracted the attention of a couple of characters by yelling at the top of his lungs at them how he was not afraid of them.  Of course that meant they followed us for a while, teasing Matthew.  Poor buddy didn't sleep very well that night.

We don't get very many Trick or Treaters anymore and I have always wondered why.  I do know there is a church in town that hosts a "Harvest Party" but didn't think would ever attract enough numbers to cause a neighbourhood decline in Trick or Treating.  I think I have the answer now.  Our mall lets kids trick or treat on Hallow e'en night.  I got a text from my co-worker, who was doing the Thursday evening shift.  She had over 300 little ones go through the store to get treat bags.  The weather wasn't even bad!  It was a lovely night to go for a walk, but people seem to be choosing the mall instead.  It makes me a little sad.  I love seeing the little ones at my door in their costumes.  Heck, even the Teenagers at my door were really nice this year.  Are people more afraid of the cold or strangers??

I am old-fashioned (and lazy).  I would rather my kids walk outside, in the fresh air and say hi to the neighbours than drive across town to the mall to say hi to strangers in stores. (Also, that is my workplace now....why would I want to go there on my day off??)

I think the mall thing might be another thing we've picked up from the Americans. I've seen several bloggers over the last few years (particularly from the northern States that have a similar climate to ours) talk about bringing their kids to the mall so that can trick-or-treat without snowsuits. Of course, this year that wouldn't have been an issue, but I think for those times when it's cold, wet, and miserable, it presents an appealing option for kids and parents alike.

Oh yes--cold wet and miserable are good reasons for indoor trick or treating, but this year it was GORGEOUS out. I always feel like we can't waste those days indoors if we have an excuse to be outside. I guess next year if I want to see costumes, I'll need to volunteer to work Hallowe'en evening.

We live on the older side of a small town on the outskirts of Portland, Oregon. About 10 years ago, a new subdivision went in. The houses are so close together you can hear your neighbors blowing their nose or flushing toilets. I wouldn't want to live over there. But it's a great place to go trick or treating... the kids run in packs from door to door. The last time I bought candy was three years ago here, and we had maybe five kids knock all night. So I stopped buying candy and don't turn the porch light on.

The costumes look great and it's a really good photo. You ought to frame it.

And I work with kids. I can tell you that Charlotte's pumpkin is amazingly creative and looks wonderful!!!!