This past May, my country minted it's last penny.

Inspired by Epbot's penny desk and the fact that pennies in my country are going the way of the one and two dollar bills, I decided to make my own penny mosaic. I just happened to have an old end table that was in dire need of a little attention and a piggy bank full of pennies that I had put off rolling for over a year.

I am glad I chose to do this project without the kids around.  Every step was rather time-consuming, but I am really, really happy with the end result.  I followed Epbot's instructions (posted above), but I started at the center of my table and worked outward. I polished my pennies before pouring the epoxy on as they became very tarnished as I handled them during the gluing process.  I laid my pennies out in a random fashion, trying not to pool the different colours too much, except for one spot where I clustered six pennies, one with the birth years of everyone in my family plus one for our wedding anniversary.  There are mostly Canadian pennies, a bunch of American pennies, and three 20-cent Euros. The years of the pennies range from the 1940s till now.

The edges are a bit wonky where the epoxy dripped off a couple of sharp penny edges, but the table is in a low-traffic area so I am choosing to believe the wonkiness adds character.

OK. You came for the pictures, didn't you? 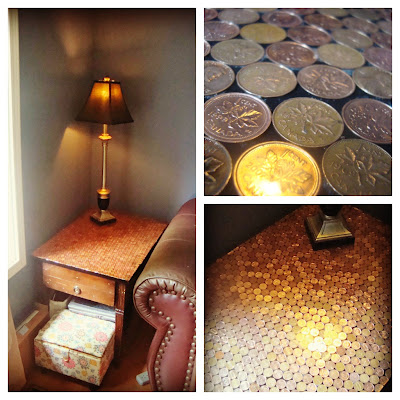 Products I used: Martha Stewart acrylic craft paint in Satin Black as a base for the pennies, 3 in 1 Advanced Craft Glue for gluing the pennies down, and Varathane Bar and Table Finish to finish the top.

August Photo a Day keywords: Somewhere you sat.  The table is resting beside my living room sofa.
Posted by Unknown at 12:00 AM

Very cool. Have you seen the photos here and there of the guy's floor? He did a huge floor all in pennies. It was less expensive per square foot than any other flooring option and looks amazing.

I love that you put a little group of your family birthdays and your anniversary.

Nice! It looks great, warm and shiny is always good!

This is so cool! I'm going to try this! I have a little end table I bought at an estate sale that is in pretty bad shape. I think this will be the thing that snaps it back into shape!

Love this! Great ode to the penny :) And I love that you included a few special dates to your family, so sweet!
Not sure if you'd be interested but I'm hosting a contest until Monday where you can enter your penny project to win a giftcard to Value Village. Pop by my blog if you want to enter!